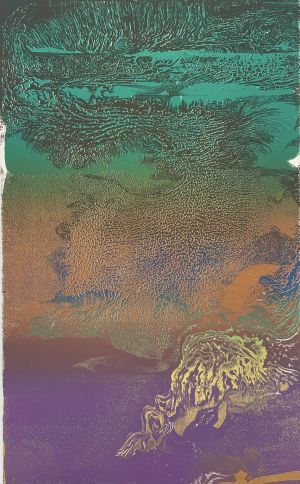 The Brodsky Center at PAFA is pleased to present The ’70s on Paper, an online exhibition featuring prints from the collection of artist June Wayne (1918–2011).

Wayne founded the distinguished Tamarind Institute, where the works in this collection were made before being donated to the Brodsky Center. Browse and purchase lithography prints made in the 1970s on the Brodsky Center’s online marketplace, Artsy.

Organized in connection with an in-person pop-up shop on Thursday, July 21st and Saturday, July 23rd.

The Brodsky Center at PAFA empowers artists to explore, experiment, and extend boundaries by creating new work in collaboration with collaborative printers and papermakers. Since its founding in 1986 by Judith K. Brodsky, it has purposely and proudly engaged artists of color and women artists as well as other underrepresented communities. With a commitment to Philadelphia’s diverse neighborhoods, the Brodsky Center advances PAFA’s reach locally and internationally by educating students, promoting the singular work and innovative ideas of influential artists, and inviting all audiences to appreciate the relevance of paper and print in contemporary arts and culture.

In 2002, artist and printmaker June Wayne (1918–2011) donated a collection of her prints along with prints she had collected by other artists to support the Brodsky Center through their sale. These prints were made at the Tamarind Lithography Workshop, which Wayne founded in 1960 on Tamarind Avenue in Los Angeles with art historian and artist Clinton Adams and collaborative printer Garo Antreasian. Tamarind moved to the University of New Mexico in 1970 and became one of the most important focal points for the revival of printmaking in the United Sates and beyond.