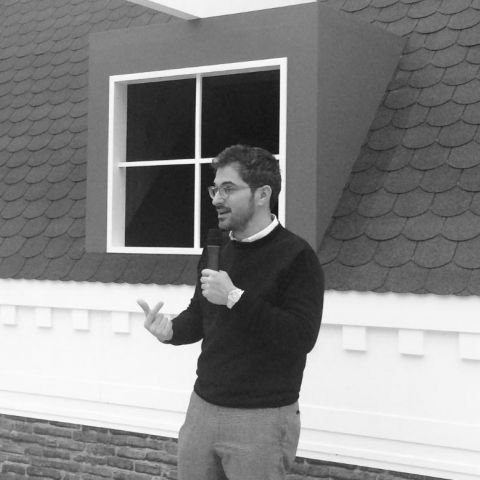 Joshua Simon is a curator and author whose work focuses on political thought and visual culture. Simon teaches the first ever history of curating course at PAFA, as well as history of contemporary art and a course exploring notions of the social in contemporary culture at the BFA program. In addition, Simon is a visiting critic at the Master in Fine Arts program at the University of Pennsylvania. Before moving to Philadelphia, Simon was director and chief curator at MoBY-Museums of Bat Yam in Tel Aviv (2012- 2017), making him the youngest museum director in the history of the country. At MoBYSimon led an expansion of the museum's facilities, educational and outreach programs, and initiated a variety of programs and collaborations with institutions worldwide. Simon is also the co-founding editor of the Tel Aviv-Jaffa based Hebrew language Maayan publishing, which publishes Maayan Magazine for Poetry, Literature and Ideas, Western (Maarvon) - New Film Magazine, and The New & Bad Art Magazine, along with a series of original poetry books and and theater plays. Simon developed and headed the theory studies at the Postgraduate program, Hamidrasha School of Art, Beit Berl College in Israel (2009-2014). Fellow at the Vera List Center for Art and Politics, The New School, New York (2011-2013), and the Akademie de Künst der Welt, Cologne (2017), Simon is the author of among others, Neomaterialism (Sternberg Press, 2013), and editor of two dozen exhibition catalogues and books, among them United States of Palestine-Israel (Sternberg Press, 2011), Ruti Sela: For The Record (Archive Books, 2015), Communists Anonymous (co-editor, Sternberg Press, 2017), and Being Together Precedes Being: A Textbook for The Kids Want Communism (Archive Books, 2019). Simon's writing has been published in many anthologies, artist books and exhibition catalogues. His work was featured in a variety of magazines and journals, among them Springerin, Frieze, Afterall, Domus International, Modern Painters, MaHKUscript - Journal of Fine Art Research, Temporary Art Review, Artpress, Art Actuel, e-flux journal, Mousse Magazine, Public Seminar and Social Text. His writing has been taught at the Royal College of Art, London, at Northwestern University, Illinois and at the Oslo National Academy of the Arts, among other places. The Los Angeles Review of Books has written that "his writings constitute one of the most ambitious attempts in contemporary art criticism to develop an aesthetics consistent with historical materialism."

Simon served on the juries for various prizes including the Ernst Schering Foundation Art Award at KW Berlin (2015), and the Landau Prize for life achievement by the Israeli Lottery 2014, and served as nominator for other prizes, among them the BostonConsulting21 Art Award at the 21er Haus Belvedere Vienna, 2015, Shpilman International Prize for Excellence in Photography, and the Vera List Center Prize for Art and Politics, 2016-2018.