Over $170,000 in scholarships competitively awarded to students each year 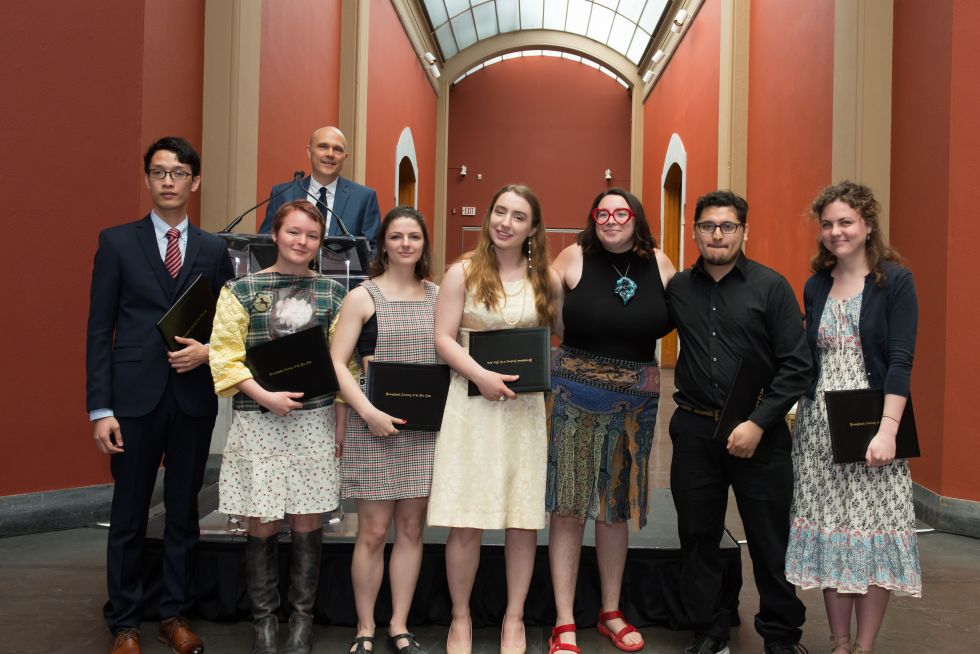 PHILADELPHIA (May 22, 2018) -- The Pennsylvania Academy of the Fine Arts (PAFA) is pleased to announce the 2018 recipients of its most prestigious travel awards and museum purchase prizes.

PAFA awards more than $170,000 in awards and scholarships annually, including travel scholarships, exhibition nominations, and purchase prizes. The award-winning works are included in the 117th Annual Student Exhibition  (ASE), on view through June 3rd at PAFA, 128 N. Broad Street in Philadelphia.

The 2018 top prize recipients are:

Jessica Smith (BFA '18) of Columbia, MD, is the winner of the 2018 William Emlen Cresson Memorial Travel Scholarship. First awarded in 1902, the scholarship recipient receives funding for European travel and full-tuition to PAFA for the two terms after completing his or her travels. Smith was also awarded the Fine Arts Venture Fund Award.

Caitlin O'dea Ott (Certificate '19, PAFA-Penn BFA) of Allentown, PA, is the recipient of the 2018 Richard C. von Hess Memorial Travel Scholarship. This is a one-year, full tuition and travel scholarship for an undergraduate student exhibiting competitively in the ASE, and is selected by PAFA's appointed faculty. Ott was also awarded the Charles E. Dutrow Award.

Julia McGehean (BFA '18) of Yardley, PA, and Abelardo Quinones Jr. (Certificate '18) of Florida City, FL, are the winners of the 2018 J. Henry Schiedt Memorial Travel Scholarships. First awarded in 1949, this scholarship is awarded to two students based on outstanding merit and faculty recommendation, and grants recipients the ability to travel abroad. McGehean is also the recipient of the Fellowship Juried Prize, the Fine Arts Venture Fund Award, the Freeman's Exhibition Award and the John Galasso Memorial Prize. Quinones Jr. is also the recipient of the Robert T. Wickersham Memorial Prize.

Ha Ninh Pham (MFA '18) of Hanoi, Vietnam, is the winner of the 2018 Murray Dessner Memorial Graduate Travel Prize, PAFA's first travel prize at the graduate level. A noted Philadelphia artist and PAFA alumnus, Dessner was the recipient of a Cresson Travel Scholarship and a Scheidt Prize while studying at PAFA, and served as a PAFA faculty member for over 40 years. First presented in 2014, this prize honors Dessner's legacy and ensures that MFA students of outstanding merit benefit, as Dessner did, from domestic or international travel. Pham was also awarded the Fellowship Juried Prize and the Fine Arts Venture Fund Award.

Ellie Blackman (BFA '18) of Dallas, TX, Claire Huber (MFA '18) of Milwaukee, WI, and M. Adil Ozturk (MFA '18) of Istanbul, Turkey, are the winners of the 2018 Judith McGregor Caldwell Purchase Prize for PAFA's permanent collection. First awarded in 1999, this prize is given annually to one or more recipients whose artwork is identified as being of significance to be added to PAFA's permanent collection. The winners are selected from works in the ASE by PAFA's President, Dean of the School, and Director of the Museum. Huber was also the recipient of the Freeman's Exhibition Award.