Emily Erb [MFA '12] was a 2017 recipient of the Leonore Annenberg Fellowship Foundation Grant, which is awarded to emerging artists "who represent the highest artistic promise of the coming generation." The grant provides recipients $50,000 a year for up to two years. PAFA, Yale, SAIC, and Columbia are the only art schools from which visual artists have been awarded this esteemed fellowship.

In 2005, Erb traveled to Madagascar, where she first encountered the ancient techniques of silk painting. For the past decade, she has shown her silk pieces nationally, including shows at the Visual Arts Center in Richmond, VA, The Museum of American Finance in Wall Street, NY, the Crystal Bridges Museum of American Art in Benton, AR, and the Delaware Center for Contemporary Art in Wilmington, DE. Erb will have a show titled American Love Story up in the School of Fine Arts Gallery at PAFA, opening in February 2018.

I spoke with Erb in her South Philly home studio, whose walls were covered in large silk pieces in various stages of development. She spoke about her artistic journey in Philly, which started when she moved here from Richmond, VA to attend Tyler School of Art for her undergrad studies, then continued on to receive her MFA from PAFA in 2012.

What is it about Philly that has been important to your work?

Originally, when I made the decision to come here, my rational was 'Well, the Roots are awesome.' At this point, I have such a network of people between Tyler and PAFA. It's a place where you can have time and space without spending all your time working. Everything's sort of DIY, you can kind of get away with stuff. I would highly recommend it for any artist. You can hide away and make your work, and if you work is good the shows will come.

For a good 11 years, I've been working in construction, painting the inside of people's houses, drywall, tile, all that stuff. I prefer that kind of work because it made me feel more in touch with what's going on around me. I've been in so many houses in Philly, all different kinds of people and lifestyles. In West Philly, I was in all these beautiful Victorian homes. I almost felt like I was doing a service to the world in patching those places up. It actually trained my hand as well. Having a job that's totally not art-minded is kind of great some times. It motivates you to work when you do have studio time.

Tell me about what being at PAFA meant to your art practice.

My education at PAFA exposed me to all sorts of literature about the art world that I would not have read on my own. [Professor] Kevin Richards is a brilliant teacher who caters to his students interests on a very personal level. I was encouraged to make work that would never fit in someone's living room and instead use the time to push the size of my work to as large as I could conceive of it. [Critic] Mark Blavat, in particular, was able to hold my hand and walk me through my own process without trying to change my work to fit his own areas of skill and expertise. [Critic] Eileen Neff was a real ballbuster who challenged my relentlessly stubborn mind, especially because I am so inspired by her work. Since I left I have maintained relationships with a handful of my classmates and a couple of teachers, growing my Philly community. I also received the Annenberg Grant because I was nominated by PAFA.

How has receiving this grant affected your life and career so far?

Since receiving this award, my life has changed dramatically. It has been exciting to work with my mentor [Curator of Contemporary Art] Jodi Throckmorton as well as [Dean of the School] Clint Jukkala and [Museum Director] Brooke Davis Anderson in navigating the best ways to support my artistic development and career advancement. So far I have moved my studio to a larger, more centrally-located space and made four national and international trips to forge new relationships in the art world while reinforcing the ones I have. I also have been afforded the time to work in my studio in order to prepare for my upcoming show at PAFA in February.

Of course, the art world is a tricky one and it's almost impossible to gauge exactly where my art will lead me. That said, I have been given the opportunity to put down my house painting tools and focus on where I would like to see my work be shown, which, in some ways, is half the battle. It's really hard to have the audacity to dream.

What work will you be including in the upcoming show at PAFA?

I'll be including five of the 6-foot flags depicting dollar bills. The dollar bill pieces started because of the Occupy Wall Street movement and all the images of dollar bills that were depicted on protest banners. Also my piece "Lady Liberty" is a collage of all images that have appeared on the dollar bill at some point in history. I'm interested in that particular imagery because they are images of things we value, because we put them on our money.

The current piece I'm working on that will be included is called "Don’t Tread on Me," which includes images of cars and guns, two things that are problematic in that they cause death. I'm interested in the cliché statement that "Americans love their cars and their guns." I draw on American history, because I'm interested in what it means to be an American artist. This country is such a hodgepodge of culture. There is no "American culture" per se, it's not hamburgers. The beauty of America is immigration.

Part of the reason I wanted to stick with this medium that's unusual is because it allows me to explore western culture with an eastern technique. Silk painting also has a prominent feminine quality. It references domesticity in the very process. Not only did I iron and sew all of these flags, I also steamed each piece in a metal box on the stove, essentially cooking my art.

What would you say to student coming into the program now, in 2017?

It's totally ok if you don't feel inspired and you spend months making shit work. You can work through that frustration and come out the other side making better work. Also, don't shy away from writing. Writing about your work helps you know what your work is about.

PAFA supports their students post-graduation in a way that a lot of other art schools don't. They really do think about you and your work as something that they are invested in as well. 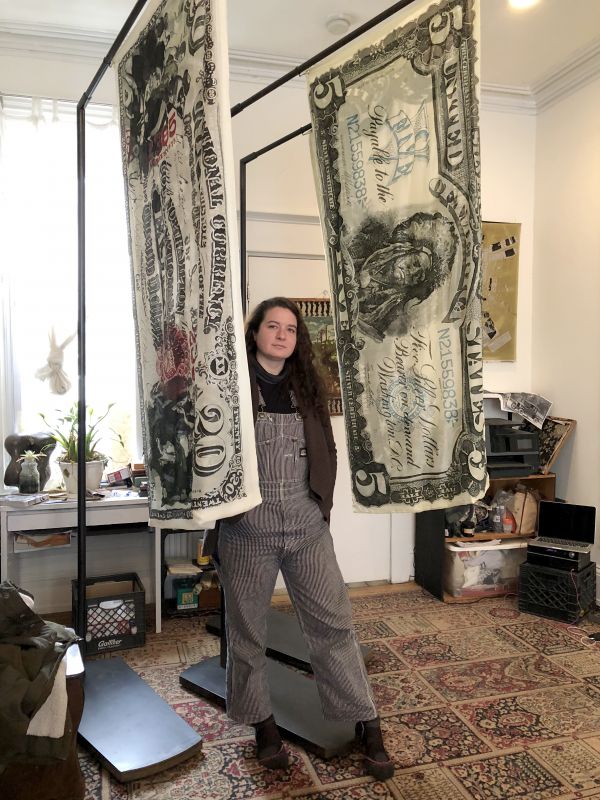 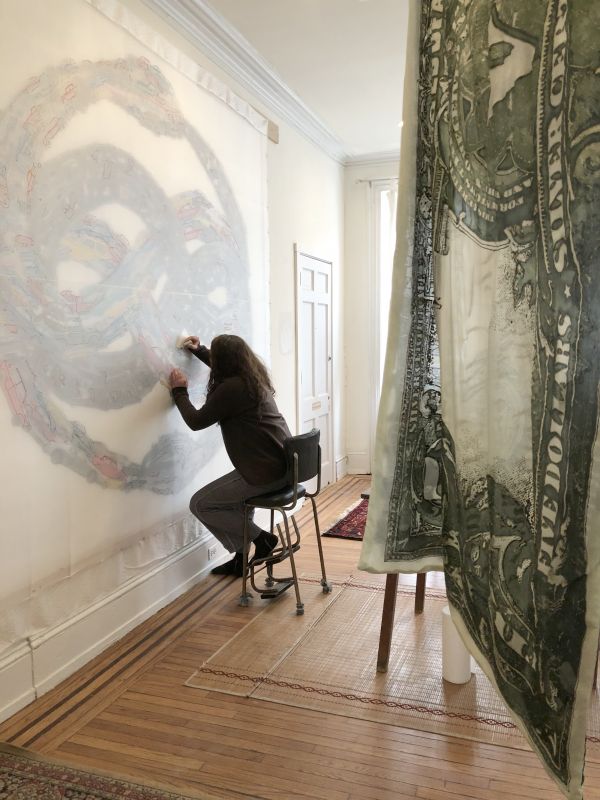 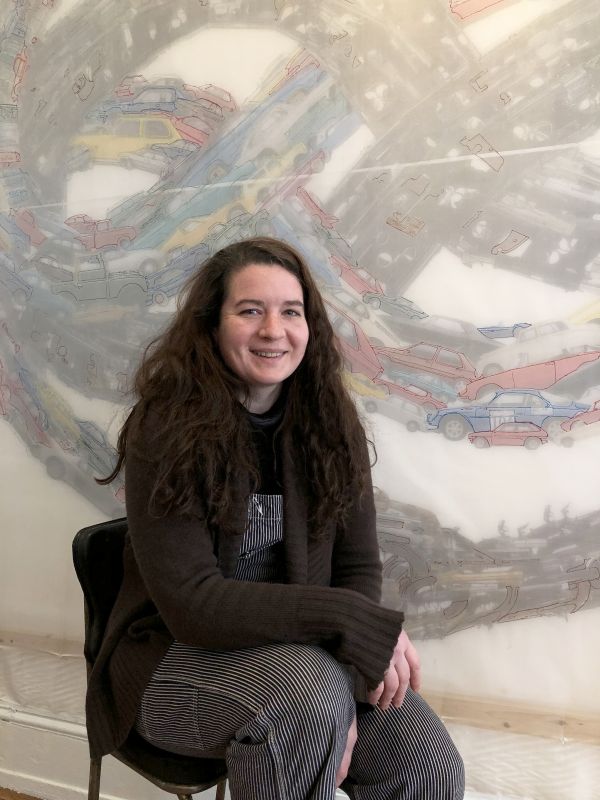 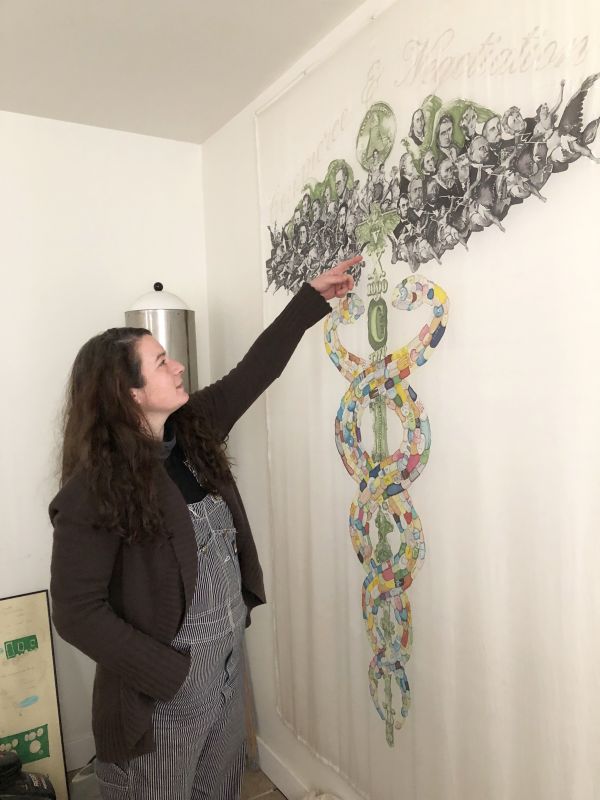