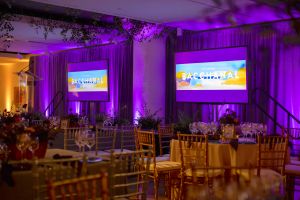 On Saturday, November 13, 2021, the Pennsylvania Academy of the Fine Arts will celebrate its 23rd Annual Bacchanal Wine Gala and Auction. Bacchanal is the only premier wine event in the Philadelphia region, and it is PAFA's largest fundraiser, bringing in over $500,000 annually. Since the event's inception, Bacchanal has raised over $9 million to support student scholarships.

This year, we are pleased to recognize Mark and Madeleine Douglas as this year's philanthropist honorees. Mark has served on the Board of Trustees since 2016.  He and Madeleine have been supporters and friends of PAFA since 2014 when they attended their first Bacchanal gala. Significant support from Madeleine and Mark over the last 7 years has made it possible for many current students and graduates to become accomplished artists throughout the world. During the program, guests will also honor PAFA alumnus Arcmanoro Niles (BFA ’13), the recipient of this year's artist award.

The evening will include specialty wine tasting, a gourmet menu by celebrity chef Rolando Beramendi, and silent and live auctions.

All proceeds from this evening support PAFA’s student scholarships. With your help, PAFA students will return to their Philadelphia classrooms and studios with newfound creative energy, making the most of world-class art education and emerging as a new generation of talented artists. We hope you will raise a glass with us at Bacchanal 2021.